This is the second part of the article dedicated to flowers and their symbolism, in which we explore the meaning of six flowers. The bellflower (in the photo) is the fairies’ favourite flower, the lily is consecrated to feminine cults, the daisy is the children’s flower, the periwinkle is dedicated to sweet remembrance and finally the violet is the flower of love vows. 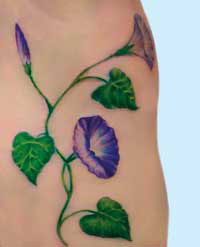 Bellflower, flower of the fairies
Campanula is the scientific name, but this flower is also popularly known as the bellflower because the shape of the petals makes it resemble a little bell. It is one of the most powerful fairy flowers and a meadow full of campanulas is extremely dangerous to cross, beset with witchcraft and spells, because they are the favourite flowers of the fairies. According to legend they grow by the entrance to the magical world and have the power to make the invisible visible. In addition, fairies use them as hats.
Campanulas are now cultivated, but they were originally wild plants and are common all over the world. They are considered to be pioneering plants because they appear in particularly hostile areas, where only moss grows, opening a path for other species.

Lily, pure and fertile
Originally from the Middle East, the Lilium family includes many species of flowers. The most well known is the Lilium candidum, a white flower which is commonly known as a lily.
It symbolises innocence, purity and chastity, but in ancient times it was a symbol of fertility. For its extraordinary ability to reproduce, the lily became the flower consecrated to women’s cults and was sacred to great mother goddesses such as Demeter, Hera and Juno.
In the Old Testament it inspired the symbols of beauty and spiritual flowering, in the New Testament it became the flower sacred to another great mother, the Virgin Mary.
In the Annunciation the Archangel Gabriel gave Mary a lily to signify her Immaculate Conception, virginity, purity, fertility and abandonment to divine will. The lily is also a symbol of the soul’s loyalty to the deepest values of life.

Periwinkle, sweet remembrance
This flower grows wild all over most of Europe. Among the Celts, the periwinkle was particularly dear to the druids, who used it to prepare potions and infusions. In some countries its flowers were spread in front of newlyweds as a good luck gesture; in other areas, its branches were woven together to create a crown to place on tombs.
The symbolic value of the periwinkle is connected to memory and the desire to leave and conserve a sweet memory.

Daisy, the children’s flower
The little daisy opens up in the morning sun and closes again at sunset. It is the flower of love predictions: it is typical to pull the petals off a daisy and repeat “he loves me, he loves me not” with every petal. The last petal you pull off tells you the truth.
Children of every generation have grown up playing with daisies, making daisy chains, posies and picking them for their mother. Thanks to this association with children the flower is an emblem of purity, candour and innocence.

Violet, love vow
This small, strong smelling flower is an emblem of love, death and sacrifice. Its purple colour is a symbol of spiritual strength and inspiration.
The traditional association of the colour purple with mourning and Lent has ancient roots and can be traced to the Greek legend of Attis, a young shepherd who atrociously bled to death after offending the goddess Cybele, who he was consecrated to. The drops of his blood fell to the ground and became violets. The cult spread throughout ancient Rome: on dies viola (the day of the violet, 22 March) a procession was held in honour of Attis, during which a pine tree trunk decorated with garlands made of the flowers was carried along.
In the play A Midsummer night’s dream, Shakespeare told the story that the wild pansy known as heartsease used to be white but when it was hit by Cupid’s arrow, the god of Love, this injury of love turned it purple and was called sweet violet. A relative of the violet, the pansy also signifies love and in the Middle Ages it was a favourite of the knights of the Round Table.

Go Back to “The Secrets of Flowers part 1“