Home > Blog > The Gifts of the Fairies for Your Tattoo

The Fairy Kingdom has also conquered the Body Art World.

Fairies are one of the top 10 most popular tattoo subjects, loved by many people. But what do they represent?

Magic is coming back to reside in our hearts.
These days more and more people are feeling the need to recreate a truer, deeper contact with nature and life, which is probably also reflected in the choice of a tattoo subject such as a fairy, loved and tattooed by both men and women. 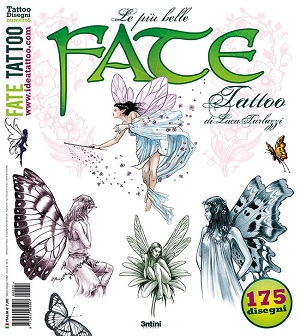 THE SECRET OF FAIRIES: WHAT DO THEY REPRESENT?
In general fairies represent the vital spirit of nature, instinct, intuition, the sixth sense, the supernatural, dreams and the psyche, spirituality and magic, hidden powers and therefore inner strengths – like the power to heal and transform – which reside in every living thing and natural element.

A tattoo of a fairy can also express personal values – such as a love of nature or dedication to others – or is sometimes chosen as a lucky charm.

HOW ARE THE FAIRIES MADE?
Fairies are represented in various colours and forms to show their characteristic appearance and special place in nature: there are in fact fairies of the springs, rivers, rocks, forest, flowers and so on.

When fairies are associated with a particular flower, plant or animal, they accentuate its symbolism with their magical touch.

MAGIC GIFTS IN A FAIRY TATTOO
and so on.
Each flower, plant or fruit, each animal and each natural element has its own meaning and can help us to personalize our fairy tattoo by enhancing it with the gifts and virtues we feel closest to in our hearts and our lives.

So! The gifts of the fairies can be “translated” into a tattoo by combining a second symbolic image with this magical figure, just… choose your own symbol!

OUR MAGIC POWERS
According to ancient traditions the world contains subtle, invisible powers, or “presences” which have a great power over human beings.
These powers are connected to us from birth and accompany us, like talents or gifts, throughout the course of our lives.

FAIRY TALES GIFTS
The giving of gifts by fairies for the birth of a baby is a classic theme in European fairy tales.
For example, everyone knows the story of Sleeping Beauty. It tells how the baby is born and her parents celebrate the event with a huge feast, which is also attended by the fairies of the kingdom. The fairies assign lifelong gifts to the newborn child according to how they are treated during the celebration.

The fairies are generous and give the baby precious gifts, but one of them, who was offended because she was shown a lack of respect, places a curse on the baby. The curse can only be overcome by a kind of initiation, in other words a “new birth”, a radical transformation which transforms evil into good, pain into healing, sleep into awakening.

A tattoo is a kind of initiation too, so… choose the best tattoo design for you and you will discover its magic!