Home > Blog > Pin-Ups. The beauties of the tattoo world

From the old school girls and mermaids, to the modern, ultra-realistic girls, in the tattoo world the pin-up has been a favourite subject for at least sixty years. 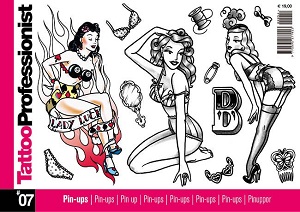 Long-legged lovelies in swimwear or tight-fitting dresses: photographs of pin-ups, with their provocative, daring look, first appeared during the 1940s.

To start with they attracted the attention of men, especially soldiers, who cut the photos out of weekly magazines and pinned them up in their lockers or tents at the front. Which is how they got their name. Pin-up of course means that they were pinned up and displayed but since then the term has been synonymous with beautiful woman.

The first pin-ups in the 1940s were mostly actresses: typical American beauties such as Esther Williams or Betty Grable, winking and carefree in appearance, without the mysterious, dramatic halo which characterised the divas of the 1930s.

Most famous of all was the legendary Rita Hayworth. An actress with Latin appeal and statuesque beauty, Hayworth was made famous by the film Gilda (1946) capturing the collective imagination of the entire world. Nicknamed the “Love Goddess”, after her photo was stuck on the experimental atomic bomb dropped on Bikini atoll, she was renamed the “bombshell”, a name which still defines a sensational beauty today.

In the 1950s, while cinema-goers worshipped Marilyn Monroe and Brigitte Bardot, still the timeless “muses” of a certain canon of female beauty today, America proclaimed a new heroine: Bettie Page, the legendary pin-up and scandalous model. In the USA her photographs attracted the attention of the vice squad, transforming her into a sex symbol who is still untouchable today.

THE PIN-UPS OF THE THIRD MILLENNIUM

Thanks to a sense of nostalgia and the continued popularity of everything from the 1950s, the pin-up trend enjoys periodic revivals and it has returned to the spotlight once more. The fashion world has rediscovered this positive yet provocative female icon.

Today’s most famous pin-up, Dita Von Teese, is a show-girl as well as a glamorous model popular with designers all over the world. And there are more and more pin-ups with tattoos, from the Suicide Girls craze to the classic tattoo cover girls that readers see on the covers of specialist tattoo magazines. From the old school cutie girls and mermaids, with their simple lines and vintage look, to the modern, ultra-realistic girls, in the tattoo world the pin-up has been a favourite subject for at least sixty years. While they used to be for “men-only” now pin-ups are often requested by women too, since they identify with the image and love getting a tattoo of it. There are celebrities such as the British singer Amy Winehouse, whose arms are covered in pin-up style tattoos.

For anyone who is looking for inspiration or designs: Idea Tattoo 151 has 19 pin-up designs in three different styles. The realistic style pin-ups by Luca Tarlazzi are inspired by 1950s models and the stunning girls in gossip magazines.

Davide Zannoni’s girls are a clear tribute to vintage old school tattoos and are inspired by the famous flashes by Sailor Jerry, the legendary American tattoo artist who has inspired and continues to inspire entire generations of tattoo artists.

Massimiliano Mariani designed his new school pin-ups while listening to Nina Zilli, a talented young Italian singer-songwriter with an amazing voice and a fun, cleverly styled look which pays tribute to the ever-popular pin-up image.

Find your Pin Up