From 17 March to 7 June 2009 at Museo del Corso in Rome, from 8 July to 27 September 2009 at Dulwich Picture Gallery in London. A unique exhibition dedicated to Utagawa Hiroshige (Tokyo, 1797-1858), one of the most important Japanese painters of XIX century, unsurpassed master of nature. 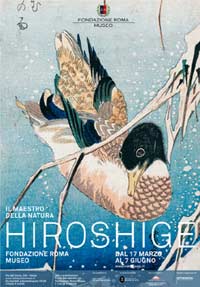 Hiroshige was the last great spokesman of the Ukiyo-e school, a genre of Japanese woodblock prints and paintings produced between the 17th and the 20th centuries, featuring motifs of landscapes, tales from history and scenes from the entertainment district with beautiful courtesans, huge sumo wrestlers and popular actors portrayed during their activities.

Ukiyo-e (in Japanese it means “Pictures of the floating world”), which tecniques allowed for production of full-colour prints in the mid-XVIII century, was capable of influencing European impressionists and other painters of that time.

After Hokusai, Hiroshige is the most famous master of the Japanese Ukiyo-e tradition and he is particularly renowned for his One Hundred Famous Views of Edo (Tokyo). The peak of his artistic expression is the representation of the natural world and the landscapes imbued with intense spirituality. This is the reason why he was named Master of Nature.

Hiroshige was a painter crowned with great success and from the East to the West he was imitated by the greatest painters of that time, such as Van Gogh, Manet and Monet.

After Rome the exhibition will move to the Dulwich Picture Gallery in London from 8th July to 27th September 2009.

The exhibition goes through the whole Hiroshige’s work and his beloved themes: nature, animals, landscapes and travels. The over 200 works showed in Italy and UK come from the Honolulu Academy of Arts (Hawaii), which houses one of the world’s most important collections of his art.