Traditional Tattoo
The classic American tattoo style, known as traditional old school and new school or Americana style, has been making a popular comeback.
Roses, swallows, nautical stars, anchors, panthers, skulls and daggers are enjoying a revival on the skin of those who appreciate the emotive, romantic side of tattoos. 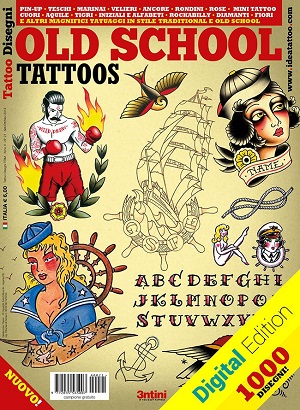 CLASSIC TRADITIONAL SYMBOLS
Traditional tattoo images are linked to life at sea, physical or introspective voyages and battles in times of war or personal, everyday ones.
The same images are seen again and again and are often reworked, redefined, made more detailed or simplified.
– USN (United States Navy), Liberty, Death before dishonor, Sailor’s grave, Man’s Ruin, In memory of…, these are just some of the typical messages used alongside permanently inked designs on the skin.
The meanings are straightforward, some are easy to understand because of the strong images, while others are linked to superstitions.
– During the Second World War sailors used to get a tattoo of a rooster and a pig on their feet as a lucky charm to ward off possible death by drowning (these animals are known enemies of water).
– The eagle is well known as a symbol of the USA, but in Christianity it also symbolises God and is often depicted in a tattoo fighting with a snake, which is a religious representation of evil.
– The femme fatale, also known as Man’s Ruin, is the opposite of the Rock of Ages, just as damnation is the opposite of salvation.
The Rock of Ages was thought to protect sailors (who had it tattooed on their back) from being devoured by sharks if shipwrecked.
– The nautical star points you in the right direction, at sea and in life.
– Daggers are a reminder of a vendetta, something important which has damaged our soul, a passion which has left a mark.
– A horseshoe is a symbol of good luck if the ends are pointing downwards, the opposite if they are pointing upwards.
– A swallow is a good luck messenger, letting sailors know when they are close to dry land.