TRISKELL OR TRISKELLION
There is no doubt whatsoever that the triskell or triskellion, the ancient social and spiritual symbol of the Celtic people, represents something magical, which is hard to explain with words and impossible to understand through merely rational analysis.

It was originally thought that the triskell was a symbol of the sun but during its history the triskell has often carved itself the double role as a spiritual, universal symbol and a treasured decorative emblem.
The term triskell comes from the Greek triskelion or triskeles, meaning “with three legs”: its graphic form immediately explains how it gets its name. THE SIGNIFICANCE OF THE NUMBER 3 IN THE HISTORY OF CIVILISATION
The number three is universally considered as the fundamental expression of intellectual and spiritual order, in God, the cosmos and mankind.
In the same way it can show the triple unit of living things or follows from the union of the Sky and the Earth, which are respectively numbers one and two.
In China, three is the perfect expression of totality and accomplishment: nothing can be added to it. Ever in China, the Hsi and the Ho, men of the sun and moon, are three brothers.
For Christians it completes the divine unit, the Trinity: Father, Son and Holy Spirit. Buddhism is made complete in the Triple Jewel (Buddha, Darma and Sanga).
Also in Hinduism the divine Manifestation is triple, in fact there is Brahma (production), Vishnu (conservation) and Shiva (transformation). 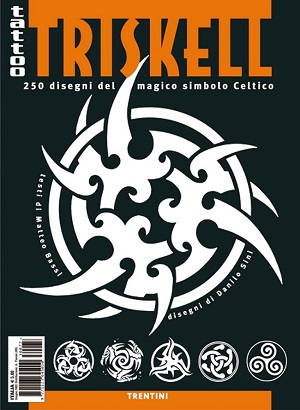 THE NUMBER 3 IN THE TRADITION OF MAGIC
Time – past, present and future – is triple. The world – earth, atmosphere and sky – is triple. Sulphur, mercury and salt are the three elements of the great alchemist work.
According to the Kabbalah, everything must go in totally inseparable cycles of three:
1. the principle that acts
2. the actions of this subject
3. the object of this action.
Three also denotes the levels of human life: material, rational and spiritual or divine.
There are three phases in mystical evolution: purification, illumination and joining with God.
In graphic terms, three can be expressed using many graphic symbols such as the trident, the tripod, the triangle and of course the triskell. WHAT DOES THE NUMBER 3 MEAN TO THE CELTS?
The Celts chose the number 3 as the paradigmatic symbol of their people.
The various examples of triplicity in the Celtic world include: the division of Celtic society in three classes; the single goddess represented through the three aspects of Girl, Mother and Old Crone; the three ages of man (childhood, maturity and old age); the three divine forms of nature (human, animal and vegetable); the three elements of the world: earth (= wild boar), water (= fish), air (= dragon). WHAT IS A TRISKELL?
The triskell is a figure made up of three legs – or spirals – placed in such a way as to suggest a circular movement.
The three dynamic elements that are represented by the three spiralling legs of the triskell are air, water and fire. The spiritual centre is put in the middle and the three legs of the triskell (shown in a spiral to indicate dynamism) receive life and inspiration from it.

The triskell can be dated back to over 3,000 years before the birth of Christ and has become one of the main themes in Celtic art. Over the centuries it has often been used by Celtic people to decorate rural homes, Celtic jewellery and tools, painted on the shields of Celtic warriors or carved onto sacred rocks.
Triskells sometimes show three legs running but in this case the symbol is a tripod, i.e. it has three legs in place of the spirals. The three legs are also depicted in a running position, with the knee bent, as we can see on the flag of Sicily, on coat of arms of the Isle of Man and on the coat of arms of the Bavarian city Füssen. MAKING A TRISKELL DESIGN
When making a triskell, also as a tattoo, it is important to remember that it moves to the right, in the direction of good; to show it moving in the opposite direction would give it a negative meaning.
Examples of triskells can be seen also today on many Celtic artefacts kept in various European museums and on the walls of Bronze Age megalithic structures in Ireland, as the entrance stone carved with triskells at Newgrange, Ireland.
Images that clearly derive from the triskell decorate windows in Gothic churches and are symbolically linked to the Trinity. Some medieval leaded windows include three hares chasing after one another and their ears form a triangle in the middle.
The triskell is also used, especially by artisans in Brittany, as a decorative motif in rural décor.