The religious tattoos you’ll see in this gallery belong to the Christian tradition: hands joined together in prayer, the face of Jesus, the Virgin Mary or the Saints. This theme is not restricted to one particular style, but realistic tattoos are the most common. 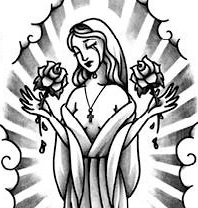 In the Middle Ages the faithful used tattoos to proudly show their devotion, permanently covering parts of their body with the religious symbols of the sanctuaries they had visited. This practice was later banned but reappeared between the 15th and 18th century as a way to show one’s spiritual identity.
The relationship between western religion and tattooing has been subject to struggle: tattoos were forbidden in the Old Testament, while these days the message is less clear and the question is taken to another level: why does a believer want to get a tattoo? To follow fashion? To rebel? That would then be a sin.

We’ll let you decide. What’s certain is that before you get a tattoo, whether you want to represent your faith or you just want to decorate your body, find out about the symbolism of the subject you’ve chosen. Depicting a culture you don’t know well can be a sign of superficiality.