Home > Blog > Articles > Under the sign of the Dragon

The image of the dragon is common to most cultures from around the world, in primitive societies as well as Oriental ones; in Middle Eastern, African, classical, Germanic and Scandinavian cultures. According to each legend the dragon is represented as a fusion of elements taken from very dangerous, aggressive animals such as snakes, crocodiles, lions and pre-historic creatures. In Chinese and Japanese mythology it also has deer’s antlers and long, whisker-like antennae. 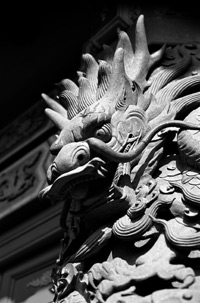 Here is how it was described in an old bestiary: «Some believe it has the body of a winged snake, which lives in the sky and in the water; its jaws are enormous, it devours men and animals that it first kills with its huge tail. Others believe it is a terrestrial being, with very small jaws, a massive, strong, destructive tail and the ability to fly. Some even believe it to be amphibious.». The dragon can actually live underground, as well as being able to fly or swim.

Young dragons hatch from an egg, like reptiles and birds. According to one of the many legends, its eggs hatch after five hundred years, while it takes twenty thousand years to become a fully-grown dragon. The dragon is a recurring figure in the Harry Potter series by J.K. Rowling and in the fourth book, “Harry Potter and the Goblet of Fire“, stealing a dragon’s egg is one of the trials at the Triwizard Tournament.

The word dragon means sharp-sighted. It comes from the Latin draco, which in turn is derived from the Greek drákÿn, originating from the Greek words derkein and dérkomai that mean to see and to stare.

It is considered to be a symbol of prophecy and wisdom and has always been used to guard temples and immense treasures (in Phaedrus’ fable “The Fox and the Dragon“, the mythical creature appeared for the first time as a guardian of hidden treasure). This animal is present in various episodes of Greek mythology, such as that of the dragon Python killed by Apollo or of the dragon Ladon, the father of Hesperidis, which guarded the golden apple tree; when he was killed by Heracles, Ladon was placed in the sky in the Draco constellation. Dragons also feature widely in the works of ancient writers such as Pliny, who describes them in his “Historia Naturalis”.

Oriental dragons are mostly depicted as good friends of the human race, while western ones are aggressive and bloodthirsty. In substance though, the dragon is always a dragon and has the same recognisable features everywhere: strength, majesty, watchfulness and a very keen sense of sight. It is also much more ancient than the human race.

The superior dragon and the tamed dragon

In China the dragon symbolises perfection that has been sublimated and exceeded, it is a «superior and tamed dragon» that has cleansed and spiritualised itself; similar in concept, although with different philosophical differences, to the one that obeys St. George after being defeated by the saint. In Christian iconography the dragon represents the devil. This negative characterisation comes from Middle Eastern figures such as the dragon in the Old Testament, which was in turn preceded by Babylonian dragon-goddess, Tiamat, an ancient mother goddess who later fell into disgrace and was transformed into a monster.

In the west, those who overcome the dragon overcome their own instincts, the monster within them, an action that lifts the hero towards greater spiritual awareness. Fighting against a dragon is the greatest test of all. Dragons were defeated by the Greeks Apollo, Cydoemus, Perseus and the hero of Norse mythology Sigurd. The patron saints of knights, St George and the Archangel Michael, appear in the act of beating one in many works of art depicting prodigies.

The Bible emphasises the negative character of the symbol (the Book of Apocalypse, among others, mentions dragons) while ancient, non-moralistic religions the dragon was worshipped like a god: in fact it appears on the standards of the ancient Phoenicians and the Chinese Manchu dynasty.

The dragon also features in Scandinavian mythology, where it is seen as an evil creature. Fafnir, for example, is the dragon that steals and guards the treasure of the Nibelungs and is killed by Sigurd. Another characteristic of the Scandinavian dragon is its linguistic skill: it can speak all languages, which it uses to lie and trick others. This character inspired Smaug the Golden, the talking dragon described by J.R.R. Tolkien in “The Hobbit“.

In Scandinavia the ormr (the derivation of wyrm or the Great Worm of the legends, also described by Tolkien) is usually depicted in the form of an enormous snake, without legs. One of the dragons in traditional Germanic and Scandinavian literature that best fits the stereotype and was later adopted by popular imagination and the fantasy genre, is in the Anglo Saxon poem “Beowulf“. It featured Grendel, a winged serpent that breathed fire and guarded an ancient treasure.

In the Far East the dragon is associated with lightning, rain and fertility. In China it is considered a positive and very wise creature, to the extent that the emperor’s throne was known as the Throne of the Dragon and his face was the Face of the Dragon. Chinese beliefs state that when an emperor died he flew into the sky in the form of a dragon and that when a dragon took flight, the pressure of its feet on the clouds resulted in rain. The saying «the earth is one with the dragon» for the Chinese means that it is raining and a traditional ritual to bring on rain in rural China was to make a large dragon out of wood and paper, which was then carried in a procession.

For oriental cultures every element of nature had its own dragon: the water dragon made it rain on the plantations and the gold dragon protected the celestial treasures. The oriental dragons also had a distinguishing feature on their feet; normal dragons had four claws while Imperial ones had five. According to other sources, Indonesian lung (dragons) have three claws, Japanese lung have four and Chinese or Imperial ones have five. The Imperial dragons (also known as celestial dragons) accompanied dead Emperors to a great palace above the clouds, which was invisible to mere mortals. The luckdragon that appears in Michael Ende‘s novel “The Neverending Story“ is inspired by this Chinese type.

The dragon that bites its own tail

In other instances the dragon represents the wheel of life and is the symbol of “rhythmical life”. This is the case with the Ouroboros, the dragon that bites its own tail, an emblem of time and its cyclical nature, a symbol of life that goes on and continually renews itself, eternally divided into successive periods, like the three ages: youth, adulthood and old age. Finally, the dragon is an intermediary between the earth and the cosmic powers, because it can enter into contact with all the stages of existence: the spirit and the divine sphere, life and its earthly manifestations, and the most underground and secret, interior forces.

Who are dragons and in what species are they divided and where do they live? Mountains and dragons are always associated with one another. The Alps are the ideal location for European dragons that live in caves above the forested areas, hidden amongst the highest peaks. The Tibetan dragons live in the Himalayas, between inaccessible mountain tops and monasteries, where the monks elect a Maestro to maintain good relations with the local dragons. The amphitere, a Mexican dragon without legs but with feathered wings, was worshipped as a sun god by the Olmecs, Mayas and Atzecs. The lindworm, a winged dragon-snake described in various Scandinavian legends, is often a dragon of the sea. Marco Polo mentions having seen lindworms in the Central Asian Steppes too.

Anyone who wants to know more should look out for Dragonology, the complete book of dragons, compiled by Dr. Ernest Drake, which also includes stunning illustrations that can also be a source of inspiration for an amazing medieval or fantasy style dragon tattoo.

If on the other hand you are looking for flash sets with original designs of Japanese dragons and traditional dragons, then see The Best Dragon Tattoos of Guido Baldini, one of our special editions that contains a collection of all the most impressive colour dragons by this extremely talented designer and tattoo artist.