Home > Blog > Articles > The sea on your skin

Fish live in an underwater world, which according to the psychology of the deep, symbolises the unconscious, and they therefore represent the living elements at the very depth of our character. In many ancient religions fish were associated with divine love and natural fertility. Yet fish are also cold-blooded animals, which are “not subject to whims and passions”. 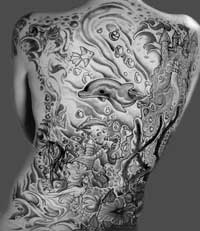 The Fish: a secret symbol

The Greek word for fish, Ichthys, can be read as an acronym made up of the first letters of the following words: Iesous Christos
Theou Huios Soter (which translates as: Jesus
Christ, Son of God our Saviour). So in ancient times the symbol of the fish became the secret sign that Christians used to identify themselves among their enemies the
Pagans. The fish symbol often appeared in the early Christian world through to the end of the 4th century.
The use of the Christian fish symbol may also have been influenced by other factors such as the use of water in the baptism ritual and the consequent metaphor of the apostles as fish in human
form.

In Mediterranean societies the fish was also a symbol of good luck, and it is still associated with New Year’s Eve celebrations. In ancient Egypt people with a sacred role (kings, priests etc.) were not allowed to eat fish while ordinary people could.
Fish, or sakana, is one of the staple foods of Japan where it is either eaten raw (sashimi) or cooked or roasted in oil. It must also be remembered that some species of fish are traditional symbols: for example, the carp is symbolic in Japan, because it can swim upstream and is considered the epitome of bravery, resistance and perseverance.

The dolphin and the gods

The dolphin is an intelligent mammal that is kind to humans and has attracted the interest of Mediterranean societies. The story goes that a dolphin saved the Greek poet Arion from a shipwreck, by carrying him to safety on the shore. According to an ancient legend, Apollo took the form of a dolphin to lead the Cretans to Delphi, where they built a temple in its honour. The name Apollo Delfinio (Lord of the Dolphins) may mean that in the Minoan territories Apollo was venerated under the symbolic guise of a dolphin, which was also an attribute of the god of the sea Poseidon. A dolphin is
also said to have favoured the marriage between the sea god and his bride Amphitrite. Since the horse was also attributed to Poseidon (the waves of the sea were likened to sea-borne horses, Poseidon created the first horse made of rock and then turned into a stallion), on horse racing tracks dolphin-shaped signs were used to show the number of laps run. Dionysus, the god of wine and
mirth, turned various sea marauders into dolphins. Aphrodite (Venus to the Romans), the goddess born of the sea, is often depicted together with dolphins.

The dolphin as a ‘ferryman of the soul’

In Etruscan sepulchral art, dolphins are depicted as those that ferry the souls of the dead to the Island of the Blessed, and it was only later that the afterlife was represented in a darker way.

The dolphin as a royal symbol

In heraldry the dolphin is reproduced as a scaly porpoise, for example in the Dauphiné coat of arms. In fact the French heirs to the throne had a personal coat of arms featuring dolphins and they were known as the dauphins.

The shell as a symbol of life and fertility

The shell is associated with the organs of birth (the pearl), and in particular with the vulva (the Latin concha is used to describe both). In fact certain types of shell were well known in ancient times (Ostrea, oyster; Pecten, scallop; Teredo, shipworm). In ancient Indian iconography the god Vishnu carries a shell, symbolising the ocean and the first breath of life. In the frescos at Pompeii and later in the paintings of Botticelli and Tiziano, the birth of Venus (Aphrodite) from the waves is represented by the goddess emerging from a shell. As a sea creature, the shell links the sexual symbolism to the concept of procreation and fertility, thus sharing the attributes of the goddess of love.

The shell between life and death Christian symbolism had a different outlook and saw the outside of a shell as the image of a tomb that contains man after death, before his resurrection.

The misleading mermaid Have you chosen a mermaid tattoo? Then you must know that over the centuries the idea of the mermaid has undergone gradual changes, from a symbol of deadly  deception, to simply the fruit of sailors’ imagination, who described seeing it after being at sea too long and having lost their senses.

The mermaid: reason and instinct Or, as in Andersen’s fairy tale, the symbol of the eternal struggle between reason and instinct on the path of spiritual evolution: attaining a soul that makes one  human and losing the tail, a symbolic animal feature, and consequently giving up one’s original home and conditions.

Mermaids: deceive them before they can deceive you
The mermaid myth dates back to ancient Greece. The most well known reference to these mysterious beings comes from the Odyssey, in which the sorceress Circe warns Ulysses of the dangers of the mermaids’ song and advises that the sailors plug their ears with wax. If he wants to hear their song, Ulysses must be tied to the mast of the ship and tell the crew not to untie him, whatever he says. Using this trick, Ulysses can hear the song without being in danger. Less well known is the time Jason and the Argonauts met some mermaids, as told by Apollonio Rodio in his “Argonautics”. In this case it was Orpheus who saved the sailors from the mermaids’ song, by playing such a wonderful melody that the men listened to him and ignored the mermaids, who were so disappointed
and humiliated that they jumped from a rock to their deaths.

Mermaids around the world

The mermaid myth is not limited to the Mediterranean area though – it is also part of Scandinavian, Irish, English, German and Russian mythologies, as well as those of Middle Eastern and  Asian countries. The mermaids are often joined by mermen, such as Triton (the son of Poseidon, Neptune to the Romans) in Greek mythology, Ningyo in Japan and Vatea, the “creator”, in  Polynesia.

Mermaids: from deception to madness

The origins of the mermaid myth are unclear and conflicting. It is strange to think that originally they had a bird’s body with long claws and the large breasts and face of a woman. So mermaids were thought to be evil beings, bearers of bad luck and the representation of deception and death combined, with their bewitching song that attracted ships in shallow waters towards hidden cliffs so that they would capsize. Some believed that mermaids were the reincarnation of spirits turned back from the afterlife, bloodthirsty creatures who fed on sailors that were able to swim towards them without
drowning. Their song put everyone who heard it into a trance, although they regained their senses once they had got far enough away and could no longer hear their song. It was like a form of temporary madness.