The rose is a symbol of love, beauty, royalty and perfection and is considered the most beautiful of all flowers, also in tattoo form. 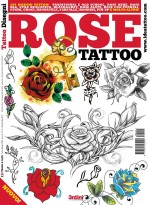 As pretty as a rose, as dainty as a rose… in the collective imagination this flower with its velvety, fragrant petals has always represented beauty, youth and especially love. It has fascinated generations of artists and lovers and is without a doubt the most widely recognised (and best selling!) flower in the world.

TATTOO ROSES
In the tattoo world the rose is the most popular flower to adorn the skin. It is so popular and so well loved that it enjoys a rare privilege: it is considered special and unique. In fact, flowers in general make up one tattoo category whereas the rose is a tattoo category in its own right, so it is no coincidence that it is called the “queen of tattoos”.

Like the lotus, the rose symbolises perfection and its shape is like a mandala, the symbol which represents spiritual realization, the fullness of being. The full, rounded form of the rose is therefore linked in meaning to the circle and the wheel, symbols of perfection and complete development, of the indestructible, eternal universe.
The magic number of the rose is 5, representing an individual who lives in equilibrium with the cosmos. There are also five petals in the simplest roses and the image of the rose most commonly used in heraldry for the coats of arms of families and cities.

THE TUDOR ROSE AND THE TRADITIONAL ROSE
The most well known heraldic rose is the Tudor Rose, the traditional flower of England, which takes its name from the royal house of the Tudors.
The rose of the English royal family is very popular as a tattoo subject among those who feel “English” through and through. There is even a website dedicated to the theme, with a gallery of tattoos dedicated to the Tudor Rose!

One subject that is becoming more and more popular is the traditional style rose, in both old school and new school versions and often used with a given name, script or skull. There are also many admirers of the realistic style rose tattoo, which can be of an exceptionally high quality thanks to the expertise and creativity of the tattoo artist.

THE NAME OF THE ROSE
Did you know that every type of rose has a name?
Some, for example, have a musical name such as Tango, Polka and Tchaikovsky. Other roses are dedicated to famous people, like the Princess de Monaco, which is refined and elegant, the Queen Elizabeth, which has pale pink petals, the William Shakespeare, with its distinct fragrance, or the Picasso featuring white-streaked red petals.

There is an ancient yet still widespread practice of naming people after flowers – for example Daisy, Iris, Violet, Poppy, Lily and so on – a tradition which is linked to the symbolism of each individual flower. Women called Rose should be proud, their name evokes the most beautiful, well known flower, the eternal symbol of beauty, love and royalty.