One of the most common tattoo styles in the West today uses the kanji Japanese writing characters. They are seen as attractive, as well as rather fascinating and mysterious since they represent something magical (like all symbols for that matter). Yet many people get kanji tattoos simply because they are “in”, often without knowing what they mean or interpreting them very freely. According to the Japanese, the result is that lots of Europeans and Americans have kanji tattoos with a meaning that is sometimes very different from the one the bearer thinks it has. According to another, more western-friendly, school of thought it is not wrong to interpret the characters on the basis of our own way of seeing things. The evolution of languages over time is a natural phenomenon, and part of their very nature. Every language has evolved from another and has borrowed words from other languages. Even contemporary Japanese has a wealth of American English terms, so it is not so strange that Japanese terms are used in the West, even as tattoos.

A lot of people get kanji tattoos because they like their meaning and so they choose ones that represent inner or personal qualities (strength, beauty, energy, power, love, woman, man and so on), which once transferred onto the skin become a sort of kanji guiding spirit in the way you live your life.

It is also very popular to get your own or your loved one’s name tattooed in kanji. In this case however there is a specific alphabet, known as katakana, used to translate proper names. The translation is purely phonetic and so it just translates the sounds that make up the name. The kanji version, which contains meanings as well as sounds, changes the situation further. In fact, when the various kanji are put together they create new sounds and in actual fact new meanings. So, the Japanese explain, the literal kanji translation of a western name turns it into another name.

The art of beautiful kanji

The Japanese cultivate their handwriting as an aesthetic cult too, so much so that there are even national “beautiful kanji” competitions in Japan. The interpretations of kanji are based on four main forms of writing- classic, seal, semi-cursive and cursive – with different origins and distinct graphics.

Right: look how the word “romance”, or renai in Japanese, changes when it is written in the four main versions of kanji: classic, semi-cursive, seal and cursive. Renai is formed with two kanji characters, koi (physical love) + ai (feeling); when used in combination with the second, the first changes sound and together they alter the meaning of the word.

Classic - This is the natural evolution of the original Chinese kanji style. Apart from being the most commonly used and clearest form, it is the most widely recognised representation of Japanese writing across the world and is the one used in the west.

Seal – So called because it is applied to official stamps and seals, although it is also printed on paper. It is the closest to the representation of old Chinese hieroglyphics; its continuous, simplified thickness seeks to represent the mark made by an engraving.

Semi cursive / cursive – Now we get into the multi-faceted world of “beautiful kanji”, where the characteristics of semi-cursive and cursive change depending on the artist writing them. Both styles originated in the west of Japan, but from different regions. The cursive style is formed without taking the hand away from the paper; it is quicker to do but more difficult to read because it varies greatly from the original classic form.

In Japan a good kanji artist always creates personal versions but in the west this detail is rarely noticed. «Because of the difference in cultures» say the experts. In fact calligraphy, which means beautiful handwriting and is a cultured characteristic for the Japanese, does not attract the same interest as it once did among westerners (cultured or otherwise).

In order to understand why it is so complicated to translate western names into Japanese, here is a short excursus into the writing of the Land of the Rising Sun, which is made up of hiragana, katakana and kanji.

This is mainly used within writing, to denote linking words that can be likened to our own (and, or, in fact, that is, so, therefore, thus and so on) and linking prepositions (of, at, from, to, in, with, on between etc.). Each hiragana character corresponds to a distinct sound, like in an alphabet. There are about thirty symbols in all, which are simpler than the kanji and can be used to write words of non-Japanese origin, such as the names of objects, but not people’s names.

This is also made up of about thirty symbols with phonetic values. They are less complex than kanji too and are used to write non-Japanese personal names. Katakana is considered the easiest part of Japanese writing, but not all names can be reproduced faithfully, partly because of the limitations of Japanese (and Chinese) pronunciation, which does not always have a corresponding sound for western letters. It is well known that it is difficult for Japanese and Chinese to reproduce the phonetic hardness of the letter ‘l’, which they inevitably turn into an ‘r’.

Kanji originally came from China and the current graphic form is the natural evolution of Chinese hieroglyphics, which have been redesigned over time, eventually becoming a form of writing. The kanji script makes up the main body of Japanese writing in its most commonly used and widely ranging form. It includes an unknown number of several thousand characters; even the Japanese do not know them all and they only use about a third in everyday language. Japanese children learn to write later than those in the west because of the complexity of their native language. There is a reason why…

Unlike the other two forms of writing, kanji characters have two sides to them. Each one corresponds to a sound as well as a meaning. They are complicated because the meaning of a kanji character changes sound when it is used in conjunction with another kanji. Slightly different meanings are also taken on when they are put together to when they are used separately.

The kanji characters are used for Japanese personal names and are put together in various ways. Their double function means that the names have something more than ours in terms of etymology. A Japanese person can also “dissect” his or her name in kanji to discover its origin, while if we take a western name apart we just get syllables and sounds that now have little or nothing to do with the original meaning of the name. 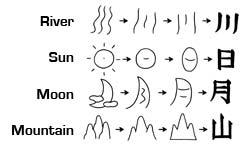 What is an ideogram?

Originally it is the graphic (engraved, painted, drawn etc.) representation of ideas or things simplified into signs that make them easy to recognise. For example a circle is often used o represent the sun, a triangle pointing upwards represents fire, a wavy line is water or a snake. In the past this system of ideographic symbols enabled peoples with different languages to communicate with each other and very similar ideograms can be found all around the world.

An ideogram, which to a certain extent coincides with the hieroglyphics of ancient cultures, transforms an image into a conventional sign (a circle, triangle, wavy line and so on) and can also form part of the alphabet. The majority of the ‘abstract’ paintings from the end of the Palaeolithic and Neolithic ages are ideograms that range from simplified drawings of living beings and object representing complex ideas (religious ceremonies, divinity, sexual symbolism and so on). In China original ideograms have meanings that are quite faithful to the objects being represented, but over the years they have been modified to represent mainly ideas and concepts.

The above table shows the evolution of Japanese writing from Chinese hieroglyphics through to today’s script, made up of ideograms.

Do you love kanjis? Do you want to know more about this style? Take a look to our special issue Japan Tattoo 2 >>