The triskell is the most well-known and widespread Celtic symbol in the world.

Anyone who has it as a tattoo usually wants to underline their connection with the Celts or attraction to the special meaning of the emblem. 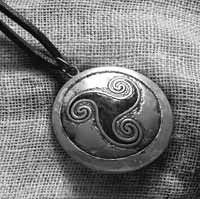 The triskell design is geometric and curved, with three arms in a spiral shape that come together in the centre, which they rotate around.
The design usually fits perfectly inside a circle, but it can also be drawn inside an equilateral triangle.

WHAT DOES IT MEAN THE NAME TRISKELL?
The name triskell, which is also known as the trischele or triskelion, comes from Greek and means “three legs”.
The three legs are the three spirals – although sometimes, as we will see, they are actual legs – which create a symmetrical rotating image.

WHAT DOES IT MEAN THE SYMBOL?
The meaning of the triskell symbol is not entirely clear, probably because it represents various, overlapping meanings.
In general it is linked to the magical value of the number three, defined as the perfect number by the Catholic church too since it was chosen to represent the Christian trinity, which took the place of the ancient Pagan triad.

The presence of a centre that acts as a pivot (the steady point of the rotation) and a circle that separates the design from the outside, connects it to the sun cult too.
In addition, the presence of spirals, which always symbolise movement, links it to the principle and in the end, to the eternal evolution of things that change over time.

THE OLDEST TRISKELL
There are several variations of this spiral shaped motif, which has been used in Europe since Neolithic times and is still the national symbol of some countries today.
The oldest triskell designs in Europe can be found in County Meath, Ireland, in the form of large spiral shaped figures engraved on a huge rock placed in front of the main entrance to Newgrange, a megalithic burial.

CELTIC SYMBOL
One of the most celebrated triskells in the world of archaeology is on an object found in the north of Italy: a phalera (a round plate that decorated a horse’s harness) that dates back to around 2150 years ago, discovered in Manerbio sul Mella and now preserved in the Roman Museum of Brescia.
The triskell is universally known as a Celtic symbol and for the Celts it represented the holy triad.

THE HOLY TRIAD
All religions feature triads, or «systems of three» (three divine figures, three energies, three magical powers etc.) that correspond to the primordial forces or the faces of the supreme divinity.
These triad systems were not conceived of in such a precise, set model as the Christian trinity and they are not always easy to understand.

In general, triads represent the main manifestations (the “faces”) of the divine power, or when they are more philosophical and internal, their activities are connected by analogy to the spiritual activities of the human soul.

One example that can help us to understand the wider concept of triads also comes from the Celts, who saw every god and goddess as divided into three – each was in fact ‘three in one’ and symbolised the three fundamental stages of life, i.e. youth, fertility and old age, which were always connected and reflected in the cycles of human existence itself.

THREE IN ONE
The triad was the system the Celts used to make sense of the world and divinity.

Every goddess for example had a triple function as Virgin-Mother-Old Woman, and also as Daughter-Mother-Sister.
Every god, in the same way, was Boy-Father-Hunter, or Son-Father-Brother.
All these figures express the cycles and roles of life: Beginning, Fertility and Senility.

Senility or Old age and Hunter – the Hunter figure is described in the article “Horned and happy” – are figures that reconnect with death, which, like birth, is the door that opens onto another new life.

THE THREE WORLDS
Widening the scope of the numerous meanings, for the Celts the triskell represented the triple manifestation of the One God, whose gifts are Strength, Wisdom and Love.

FROM THE TRISKELL TO THE IRISH SHAMROCK
One of the first monks dedicated to spreading Christianity in Ireland was St. Patrick (415-493 A.D.) who found a very simple way to convey the concept of the Christian Trinity to the Irish.
St. Patrick adopted a shamrock and explained that the Trinity was made up if three distinct, yet united spiritual figures (Father, Son and Holy Spirit), like the three leaves on the shamrock.

St. Patrick’s shamrock, which was most likely inspired by the triskell symbol, is now one of Ireland’s national emblems.

THE TRISKELL ON FLAGS
Among the ethnic groups of Europe, along with ermine the triskell is the national symbol of Brittany or Breizh, the inhabitants of which chose it to underline their Celtic roots.

The triskell is also used as a nationalist symbol by the Asturias, who distinguish themselves in this way from Spain.
A version of the triskell also features on the flag of Ingushetia, an autonomous republic in south west Russia.

THE THREE-LEGGED SYMBOL
A triskell appears on the flag of Sicily and that of the Isle of Man but in this case the symbol is a tripod, i.e. it has three legs in place of the spirals.
The legs are depicted in a running position, with the knee bent.

If the classic triskell can be linked to the symbol of the sun, the version with legs suggests a connection with the underground, hidden forces of the earth.

The triskell of Sicily in particular has a female mask in the middle, identified as the head of Medusa, the monstrous figure of Greek mythology that took the place of a previous, even more ancient goddess.
This figure inside the symbol suggests a connection with the mysterious forces of the earth and the ancient cult of the Mother Goddess.

The three-legged symbol was already used in ancient times in Sicily and can be found on Greek coins minted in Siracuse, a city of Magna Graecia.
According to Pliny the Elder the origin of the Sicilian triskell is related to the triangular shape of the island.

THE NORDIC VALKNUT
The triskell is sometimes connected to a Germanic symbol called the valknut, which consists of three triangles tied together.
The valknut is also known as ‘heart of the dead one’ (a hero), ‘heart of Vala’ (the Valhalla, kingdom of the Viking heroes who died in battle), ‘heart of Hrungnir’ or ‘Odin’s knot’.

Today the valknut has been chosen as the symbol for Neo-Pagan religions, in particular by the Asatru groups, who refer to Nordic mythology and spirituality and for them it represents the Nine Worlds (nine = three times three).

THE TRISKELL REPRODUCED AS MODERN LOGO
Versions of the triskell can also be found reproduced as modern company logos.
One very well known example is the symbol of Mercedes, where the triskelion dinamic figure developes into a three- pointed star enclosed in a circle (it symbolize the ability of the motors for land, sea and air usage).

Adidas has also produced a line of footballs with their triangle logo remodelled in the shape of a triskell, and a tribal triskell is the symbol of N.O.D., an Italian footwear manufacturer.

FROM STAR TREK TO CELTIC MUSIC
In the second series of Star Trek there is an episode where the crew of the Enterprise finds itself on a planet called Triskelion.
The symbol of the planet Triskelion is a cut-off blue triangle with a stylised triskell drawn in the middle.

Ever about the modern usage of the triskell, in the late 1960s and in the 1970s this Celtic symbol was adopted by the Breton musician Alan Stivell.
Triskell is also the name of a historical Breton band that plays Celtic music, which was formed in Brittany more than thirty years ago and whose unique sound is created by the two Celtic harps in the ensemble.