Home > Blog > Articles > May the carp be with you

Popular in Japanese tattooing and a symbol of fortitude, courage, perseverance and success in life’s challenges. The carp is also an emblem of longevity and like many oriental symbols it is used as a lucky charm.

In the Far East the carp is a good omen and it is often used as part of special greetings, without forgetting that its famed longevity makes it an emblem of long life. It is depicted on the rooftops of houses, where its image protects against fire.

The carp is the mount and messenger of the Immortals, who use it to rise up/ascend into the sky, and messages and seals are found in its stomach. In Vietnam, during the days just before the new year, the carp takes the Tutelary Genius of the House into the sky, while during the mid-autumn festivals a carp protects the houses from the damage of the Golden Carp, a devilish spirit in popular Vietnamese and Chinese myths.

Turning into a dragon

In China and especially Japan the carp is a symbol of courage and perseverance. An ancient Chinese legend tells the story of a courageous, persistent carp that manages to climb back up the waterfall at the Dragon’s Gate, along the Yellow River, overcoming obstacles and evil spirits. The gods, who were amazed by this act of bravery, transformed it into a large dragon.

In the shape of a dragon the carp receives the gift of immortality and becomes the symbol of those who aspire to achieve great things and are not afraid to face the adversities of life. This journey of initiation symbolises the path of human beings themselves who, if they develop constancy and perseverance, can emerge from the depths of life and become learned and self-aware or superior people.

In Japan the carp is also a daring symbol of virility and more specifically the emblem of young men. On the holiday that is dedicated to them in May, paper or fabric carps are hung on top of a pole or on the roofs of houses. According to one legend the carp is the most courageous of fish because it swims up waterfalls and accepts its inevitable death with dignity. In Japan it is said that when a carp is on a chopping board it does not flounder but remains completely still, unlike other fish, which attempt to escape. It is the same way that a samurai faces death, as should any real man.

For the Chinese the carp is also a symbol of intellectual supremacy and offering a carp to a student for example is a way to wish them luck before an exam.

The carp known as koi are an ornamental variety of the common carp. They are brightly coloured and are kept in ornamental garden ponds and lakes. They are commonly bred in Japan. The story goes that the first carp farmers were rice growers who noticed that the variety of colours on the carp made them even more striking and beautiful than brightly coloured birds, so they began to breed them. The Japanese also believe that these fish can swim upstream. Carp live in the slimy riverbed and keep the water cloudy and muddy because they constantly move their noses about in the mud. This makes the water they live in impure yet they are still highly regarded among the Japanese. Also in Japan there is a beauty contest for carp. The breeders who enter their fish are able to make selections and cross breed various species in order to create carp with very varied and beautiful shiny colours.

The Japanese term koi simply means carp. There is however another word that has the same pronunciation and means «love, affection», so carp are also a symbol of love and friendship in Japan. Koi and tattoos of koi are traditionally considered to be lucky charms.

The common carp is believed to have originated in Persia, China, the Black Sea and the Caspian Sea. Although it is not a rare or particularly flavourful fish, it was introduced into Europe many hundreds of years ago because it is very adaptable and it is often found in man-made fishing lakes.

It is true that carp are very long-lived fish: it is estimated that they can live to 40 years of age or sometimes more, but the Japanese love to exaggerate and they say that carp can beat that record. In Japan there are stories of carp that have lived to more than one hundred years of age and some legendary koi have even reached two hundred and more. What’s more, they grow very quickly; they can vary from 30 to 60 centimetres or sometimes even more than a metre in length. They are very strong, energetic fish, qualities that have contributed to their many symbolic attributes. 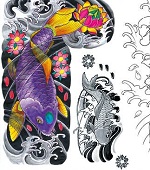