The American tattoo artist Don Ed Hardy inks a deal to stop buying animal fur and joins the growing list of designers and retailers saying “no” to animal fur. 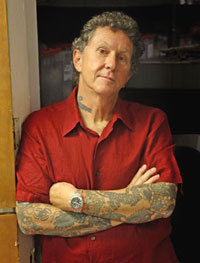 It was the end of last April when Hardy Life, LLC and Don Ed Hardy announced that animal fur will no longer be used in any new Ed Hardy brand product, making him the latest designer to say “no” to animal cruelty.

The American tattoo artist Don Ed Hardy (in the photo) is known as “the godfather of modern tattoo” and the crossover of his tattoo art into the fashion world generated a successful brand empire, with the Ed Hardy brands representing a lifestyle of street couture on designs from a wide range of licensees and sub-licensees.

Hardy was upset to find animal fur cropping up in products bearing his name and, with the support of The Humane Society of United States fur-free campaign, he advocated for the removal of animal fur from all future Ed Hardy products.

«As someone who cares about animals, I am deeply offended by and opposed to the inherent cruelty of animal fur», said Don Ed Hardy. «I am delighted to work with The Humane Society of the United States on creating a more socially responsible and humane fur-free policy for Ed Hardy brand products.»

«We are pleased to recognize Don Ed Hardy as a leader for setting a high standard of compassion – one which will undeniably reverberate throughout the fashion community,» said Andrew Page, senior director of the fur-free campaign for The HSUS. «With the new fur-free policy, Ed Hardy is sending a powerful message that cruelty has no place in fashion.»

Today Hardy is retired from doing actual tattoos, but oversees and mentors the artists at his San Francisco studio, Tattoo City. Since the 1980s he has concentrated heavily on non-tattoo based art forms, especially printmaking, drawing, and painting.

In 2002 Hardy was approached by Ku USA, Inc. to produce a line of clothing based on Hardy’s art and a licence agreement was signed. Within two years, the collection had drawn the interest of Saks companies. Hardy and Ku USA formed Hardy Life LLC, which holds the trademark ownership as well as the copyrights to all his images.

In 2004 the French fashion designer Christian Audigier licensed the rights to produce the high-end Ed Hardy clothing line, which is based on Hardy’s imagery. Ed Hardy stores are located in many cities all over the world.