What does the dragonfly symbolise? Since ancient times it has represented gracefulness and lightness but it is also a symbol of maturity. 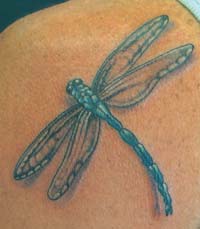 The dragonfly, a creature of the wind, rests on water and flowers and flies delicately across the sky. It is mysterious, colourful, transparent and a delight to watch. Since ancient times it has symbolised the gracefulness and lightness of the natural world and agility of movement. Admired for its grace and elegance, its iridescently coloured wings and delicateness, the dragonfly is also a symbol of Japan. Its climate and plentiful waterways make Japan the ideal territory for dragonflies, in fact it is even known as the “Dragonfly Island”.

As well as being a symbol of summer and early autumn, in Japanese art this creature also represents success in general, strength, courage and joy, as well as being associated (like other insects) with success in the martial arts. The samurais often used it to decorate their helmets and armour. For the Native Americans it is a totemic animal, the symbol of transformation, and dragonflies in general are the souls of the dead. The amazing colours of their wings are associated with the magic of colours, the powers of illusion and dream, and mysticism.

The dragonfly has a long body, four fine, transparent wings and a short, wide head with two separate eyes. It is agile and strong. It is a member of the odonata family of insects, which have a biological connection to watery environments. Young dragonflies actually live in the water and while the adults are excellent flyers they never stray far from the water.
With ties to aquatic areas such as ponds and marshes, the dragonfly is therefore connected to two natural kingdoms and two elements – Earth and Water.

It is associated with creativity and is the symbol of those who face life in a natural, spontaneous way and know they can find the right balance of love, work and health. Like the butterfly, the dragonfly, is considered a messenger of positive forces and represents maturity; its spirit encapsulates beauty, awareness and freedom. People who choose this animal as a personal symbol – perhaps also getting a dragonfly tattoo – have a passionate, emotional life during their youth but as they become older they become more balanced, controlled and able to think clearly.

Would you to get a dragonfly tattoo?
Dragonfly designs on Idea Tattoo 121

Dragonfly tattoos, the best photographs on Tattoo One 42