The lion, a strong, regal symbol

The lion is known as «the king of the jungle» and the lioness is the undisputed queen. She hunts for food for her cubs and the adult males, and the survival of the pride depends on her skills and experience.

The male is a symbol connected to the sun because of his red mane, which looks like rays or flames bursting out. Adult lions in general, both male and female, symbolise majesty and strength. The lion family is made up of the male, the lioness and their cubs, and it is here that the sense of majesty, dignity and strength (physical but also moral) reach their peak, symbolising maturity, wisdom and of course, a happy union.

The cherry, a symbol of love

Cherries represent love, vitality and the joy of sharing and if you get a cherry tattoo you are saying that you love life, especially your love life. In fact most designs feature two cherries, a symbol of the perfect partnership. Sometimes one of the cherries has a bite taken out of it (a sign that life is enjoyed to the full). Some people also get a single cherry tattoo or a triangle of three cherries. 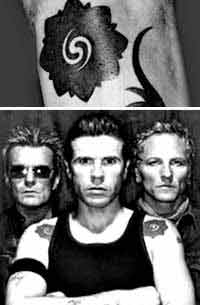 The Rose of Borneo, a symbol of bravery and skill

The rose of Borneo symbolises value, strength and courage and is a very popular tattoo in Borneo, the large Indonesian island (the third largest island in the world), south east of the Philippines.

In Borneo the art of tattooing is still practised according to a thousand-year old tradition and this small rose is tattooed on men who have earned special recognition through great feats in war or hunting. In general it is placed on the front or back of the shoulder area, which is also a highly symbolic position because the hero wears it like a royal cloak showing his value and talent.

This tattoo is also very popular in the west and Idea Tattoo magazine can offer you lots of different versions: in Idea Tattoo 118 there are two new sets of Borneo roses, adding to the collection of designs printed in Idea Tattoo 117. Not forgetting the classic, traditional rose of Borneo design, which also adorns the shoulders of Ian Astbury (left), singer with rock band The Cult, who stars in our VIP Tattoo area, again in Idea Tattoo 117.

The swallow, a good luck symbol

Swallows have always been a favourite tattoo subject among sailors, because they represent good luck and the journey home (swallows are migratory birds that return to their nest every spring). Now depicted in the American traditional new school style, swallows are very popular with both men and women.

The swallow also symbolises good company, so they are often tattooed as a pair. When it carries two cherries in its beak, one for itself and one for its companion, the swallow represents love, care and protection. The cherries also refer to the theme of a loving couple.