To start with let’s look at some practical examples that help you become a more confident artist. As we said it is crucial to follow a method and we are now going to show you the true essence of drawing, the Artists’ Secret, which consists of visualising simple forms in order to arrive at the depiction of anything you choose.

One of the artists’ secrets is perspective. But what is perspective exactly? It means we have to draw a figure so that it looks like a solid, three-dimensional object, that moves in a real space and not like a flat puppet on a piece of paper.

Drawing a figure with perspective and depth is not simply a technical problem that we have to solve: it is the very essence of every figure. This was the starting point for great artists such as Leonardo da Vinci, Michelangelo, Tintoretto, Rubens and all the great painters and illustrators. But we don’t want to make things too complicated so we’re going to start with a very simplified method of drawing: comic strip style, the origin of cartoons. 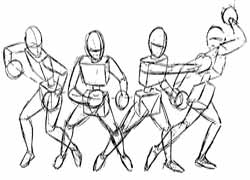 Circle, square and the ABC of 3D

To understand how to conceive an illlustration, the multi-phase drawings used in animation are very useful and in the image above you can find some examples with the basic secrets for drawing people in movement.

As you can see, you always start with very simple forms (circle, square, rectangle), which are then made three-dimensional with the most basic rule of 3D: the drawing in perspective with the body formed by spheres and cubes.

Objects are also drawn using the same method and most tattoo designs, from figurative to Japanese or traditional American style, use the same basic rules.

Another secret: artists pay a great deal of attention to how the original is formed and in order to produce a copy, whether it is realistic or a caricature, they use a lot of photographs. Looking at photos of subjects we want to draw helps us to visualise their actual shapes, which we can then personalise and modify as we like. But before we can alter any subject the main thing is to know what it really looks like.