In 1995, a few months before our publishing house 3ntini delivered the first issue of Idea Tattoo to newsagents, a well known Italian television presenter declared in a weekly magazine that «sooner or later we will have to give some air-time over to new faces, so that the small screen can welcome and train some different men and women». 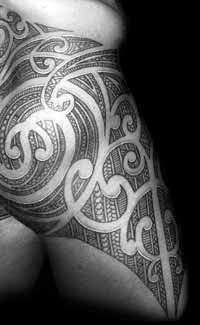 Ten years later we can confirm that never has a declaration been quite so prophetic: the birth just a few years later of the by now notorious reality shows released such a huge number of new faces into the glittering world of television that we have already lost count of them.

If we just try for a moment to forget about all our preconceptions and ask ourselves if we haven’t, at least once, been caught up by the trivial goings on or the characters in reality shows; the answer is yes, we have. The fact that they, the reality TV stars, talk about totally normal – and often banal – things and that they are in the end just average people, catapulted into the world of television without a safety net, means that we can identify and in some cases emulate them. Now we come to the implications for tattoos. Some reality TV stars, often the more eclectic among them, have tattoos; nothing major of course, but enough to ensure that viewers, who might never have been exposed to the tattoo world, started to take an interest in tattoos and think about getting a tattoo themselves.

Trends often follow an unusual dynamic or a seemingly tortuous path and the one above is undoubtedly an example, as are the advertising campaigns produced by big car, shoe and perfume companies, featuring people with tattoos. One of the reasons for the explosion of tattoos which have gone from being a niche cult to a popular trend can be found in the above story.

IDEA TATTOO NO. 6 & TATTOO CONVENTIONS
Tattoo conventions have marked a major turning point in Italy, helping tattoosto leave behind the clichés which had surrounded them for too long and gradually turn into the extraordinary artistic and cultural phenomenon we know today. From small meetings for enthusiasts, tattoo conventions in the 1990s became a genuine cult events leading to free self-expression and a bond that went beyond just friendship.

The credit for all this must obviously go to those who believed in them from the start: Marco Leoni for example, the amazing tattoo artist from Bologna who together with a small group of fellow tattooists succeeded in organising unforgettable tattoo conventions in his home city. The one he organised in 1993 was the second Italian tattoo convention (the first was organised by Gian Maurizio Fercioni in Milan in 1989). The following year he organised the second edition of the Bologna event: nearly 100 tattoo artists took part, including internationally renowned names too. Alongside the tattoo convention an exhibition was put on entitled “Dal muro alla pelle“, (“From the wall to the skin”), showing artwork by the best graffiti artists and international professionals such as Filip Leu, Spider Webb, Mick, Hanky Panky, H.R. Giger and Robert Williams.
The sixth issue of Idea Tattoo, a special photographic edition, illustrated every aspect of the second Bologna tattoo convention.

THE ROAD TO ISSUE NUMBER 100
For me as a huge tattoo culture enthusiast, putting together the 100th issue of the legendary magazine Idea Tattoo is a source of great pride and a little nostalgia; I think back to the first issue I edited, issue 74 and the most important milestones on my stretch of the road: my first interview with a great tattoo artist (Gianmaurizio Fercioni, Idea Tattoo 81); my meeting with Herbert Hoffmann and his tattoo; my first tattoo convention as a reporter (Ti-Tattoo in Lugano in 2003); our own Idea Tattoo Convention in San Marino; and all the encounters which over the years have led to friendships, working relationships and new tattoos…

One hundred issues represent security, stability, confidence, pride (as I was just saying). But that’s enough of looking back: there are 100 more issues just waiting to be created, fantastic tattoo flashes to publish, people to interview, conventions to record, tattoos to choose…